A History Compiled by Laurie Green

Santa Rosa County was officially created when the Senate passed a bill splitting it off from Escambia County on February 18, 1842. A courthouse was established in Milton by July of 1842, but the town did not become the official county seat until February 1843. (Rucker, page 274-9).  A "Torren Rectangular Survey System" (township and range by section) of all of Florida was started in 1831-1832 but was not completed until 1853. Two years later a U.S. Land Office was established in Milton.

The survey listed the major Milton property owners as follows: east of Canal to the River, north to Berryhill - Benjamin Jernigan, west of Canal- F.A. Ball and George Walker, north of Berryhill from Canal to Stewart-John Hunt. (Hunt also owned most of the riverfront from his brickyard down at the present day River Road subdivision, near the I-10 Bridge to Bagdad). 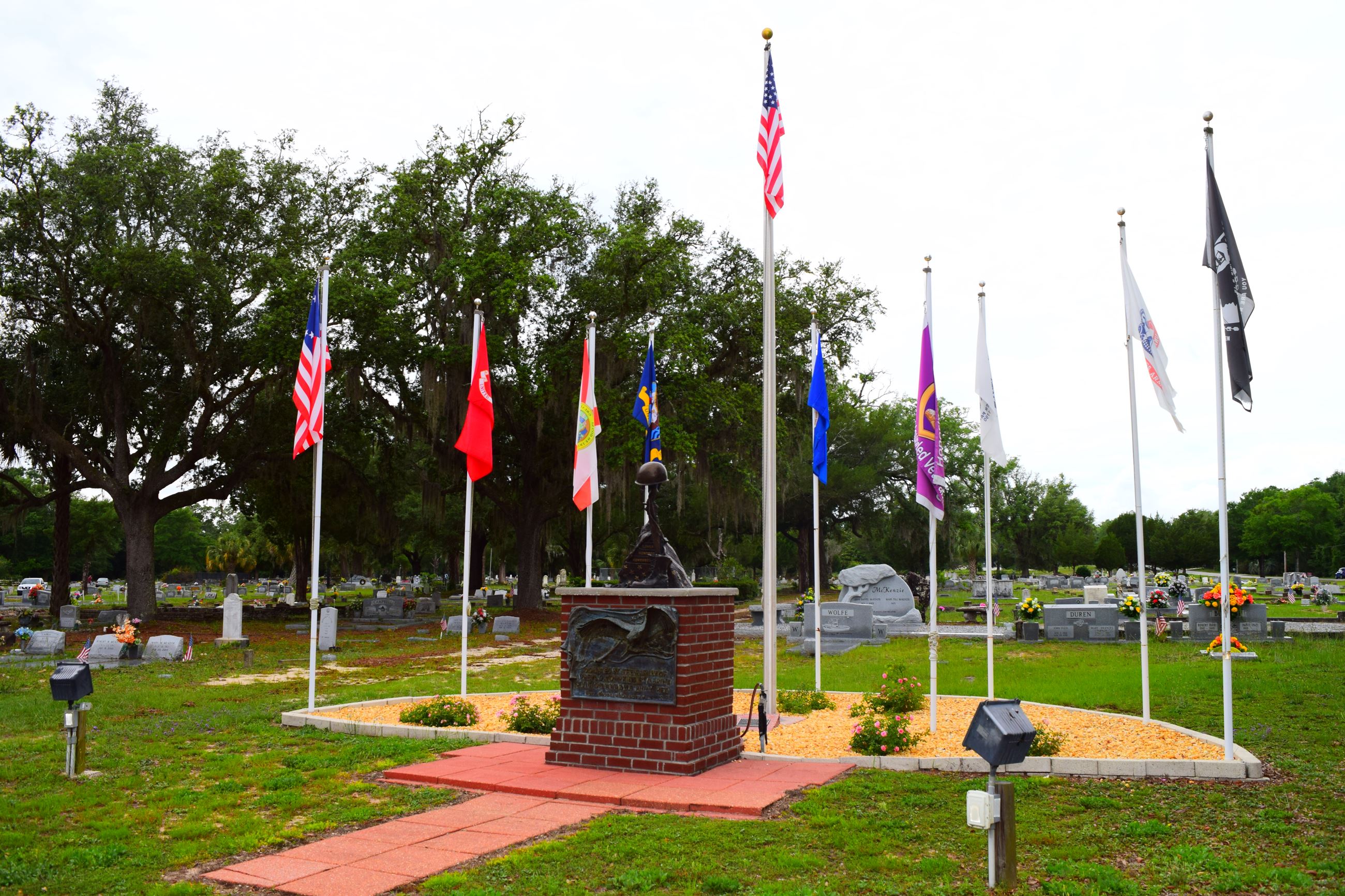 The dam site (now west of Stewart and north of Berryhill) was owned by Joseph Keyser, who had a gristmill there. Adjoining the mill property were lands owned by James R. Riley and Ben Jernigan, and directly south of the mill was owned by C. W. Stokes and A.G. McArdle. (King, page 40).

The first mention of the area now known as the Milton Benevolent Cemetery is when James R. Riley bought it on August 3, 1844. It was considered to be west of Milton, (currently 4 blocks from downtown) along the road that led to the Berryhill, and the settlements of Arcadia, Mulat, and Floridatown. A ferry crossed the Blackwater River at its eastern terminus, and from Floridatown, one could take another ferry across Escambia Bay; thus this was the main east-west thoroughfare. The courthouse was also located on this road, along with the several fine residences.

Perhaps James Riley officially bought this section as there was already one burial there--that of his father, also named James R. Riley, who died October 11, 1817, aged 48 years. However, he could have also put up the marker as a memorial after he purchased the property. Riley must have been a leading citizen, above reproach, as he was chosen to be one of three "election inspectors" for Milton in the years 1840 and 1841.

It is not known whether the cemetery site was planned as such, or just became the town's burial place by necessity and use. The town started on a high point along the Blackwater River, which bordered it on the east. Any high river frontage was important for mills, shipways and docks. (At one time the mills had lumber waiting to be shipped, stacked along the riverfront for over a mile.) The town was expanding northward on Alabama and Conecuh Streets, as southward was a marshy area, but it was not growing westward. There was a marshy area a few blocks west of the courthouse, before the road to Floridatown and Arcadia took an upward slope to the Berry Hill. Thus the most natural area for burial would be to the west. As the main road already went by this open area on its wooded way to the west, it would have been far enough away for health reasons, but close enough for convenience. There are no records to any plots being sold, but many were staked out in the 1850's and 1860's, bounded with concrete borders, brick walls, or iron fences. Perhaps they were purchased from the owner, James Riley or his heirs. It is interesting to note that the colonial custom of an eastward facing orientation was implemented and has been continued to this day.

By the time of Milton’s incorporation in 1844, there had already been a second burial. A fourteen-year-old girl had been interred in 1837 within the center of the present day boundaries. There followed the burial of an elderly man in 1845 and two years later that of a woman from New York who died in childbirth. Both latter burials were in a section somewhat distant from the first, but still within the center nucleus. There may have been more, but if so they were unmarked. Then in the 1850's burials increased to over twenty.

The majority are infants and children, most likely dying in the frequent epidemics of yellow fever, and one woman in childbirth. It can be surmised that this being a new town, peopled by immigrants, primarily from neighboring counties in Alabama, only the young and strong would have made the move. Children came with them or were born here soon after and as always are more susceptible to disease.

By the decades of the 1860's, there seems to be some establishment of family plots with more elaborate markers. Some also mention the birthplace of the new residents, i.e. Boston, New York, Americus, GA and LaGrange, GA, representing both the increasing national recognition and prosperity of the town. According to the 1850 census, Santa Rosa County was the most industrialized county in Florida, with four times more industries than the next closest, Brevard County, and far exceeding neighboring Escambia. During this decade, there were a total of 17 burials, half of which are infants and children, two young single men, four wives, and three men. (A few are marked with initials and dates only.).

This decrease reflects the fact that during the years of the Civil War, 1861 to 1865, most of the residents left the area, heading north to Evergreen, Alabama and elsewhere to escape the frequent cavalry skirmishes. The Yankees, occupying the island stronghold of Fort Pickens, often made "piano raids" into the area, stealing furniture and anything of else of value from the deserted town. They kept their eyes on this area, especially because it had so much industrial power in the lumber mills and shipyards. In fact the shipyards succeeded in building several boats for the Confederate Navy. However it was the Confederates that burned every waterfront mill and shipyard, including the newly built Confederate ships, before deserting the area, to keep them from falling northern hands. It is interesting to note, that although there are 43 Confederate veterans buried in the cemetery, none of them died from any fights in Milton, or during the War. (Of course, any one killed elsewhere would not have been sent back to Milton.) The burials during this time are three children, an elderly Bostonian, and two young men, ages 17 and 21.

Little more is known about the original owner, James R. Riley. He has no marked grave in Santa Rosa County. His heirs sold the property to Samuel F. Rushing on June 11, 1884. (Gazette, Feb 27, 1947) By this time the entire area was well established as the town cemetery, with 85 graves scattered throughout its fifteen acre lot.

Samuel Rushing (1834 to 1908) was captain of the steam tug WJ Keyser, (named for the owner of the Baypoint Mill), which regularly hauled freight and towed logs between Milton and Pensacola in the 1870's and 1880's. He also did a small business as a summertime charter, taking groups down to the forts and out to Santa Rosa Island for "Sea Bathing." He seems to have been pretty well-to-do, as most sea captains were in that era.

He also had a large working farm near Bagdad in addition to a house in Milton. (Woolsey)

On May 29, 1888 Rushing, and his wife Mary, sold the property to the newly established Milton Benevolent Cemetery Association for $100. This group cleared and fenced the land. The first group of trustees for the cemetery was Samuel J. Stewart, owner of a mercantile store, C.R. Johnson, and E.H. Holley, the county judge at that time. The Ladies Committee consisted of Mrs. R.E. Peterson, Mrs. John Hannah, and Mrs. L.L. Aymard, wife of the captain of the Helmar steamer. The cemetery was run by the trustees, and lots were now sold and the money raised used for upkeep. There was no involvement by town or county government and little mention of it in any records.

Milton newspaper records do not begin until around 1912, with a few issues in existence from a few years earlier. There is no mention of the cemetery except that the Ladies Civic League had a sidewalk built from Willing Street (the main business street, four blocks away,) to the cemetery. (Gazette Nov 18, 1913). During this period the County Commissioners also approved installing a sidewalk on the front side of the courthouse, which at that time was facing Willing Street. Shop owners were responsible for the sidewalks in front of their stores and most had wooden boardwalks built, some with tin awnings. So a sidewalk paid for by the Ladies League was quite an accomplishment. This is most likely the time that the brick entrance was also built, as a beautification project.

In a February 27, 1947 article in the Milton Gazette, it is described as being in "West Milton." Keep in mind that there were no houses yet built in this area and that the scouts used to go camping in the wild, wooded area just past the cemetery as late as 1955. The trustees in 1947 were Wiley Williams, owner of a general store on Willing Street and living in the steamboat house on Berryhill, Sammy Stewart, the New York Life Insurance agent, who owned a craftsman bungalow on Canal Street, George Leonard, Mrs. Wiley Williams, Miss Millie Mason, daughter of Captain Mason of the City of Tampa steamer, and Mrs. E. S. Beasely. It was noted that it was maintained with funds derived from lots sold.

Over the years, the trustees retired or died, and no new ones volunteered for the job. It was left to one man, F.M. (Bubba) Fisher, the long time property appraiser, to maintain the records. The city gave the Cemetery trustee a grant to maintain the grounds, which were sometimes also cleaned by the county inmates. In 2001, he asked Milton Mayor Guy Thompson and City Manager Donna Adams to do something about this overwhelming situation. They asked various citizens to revive the Milton Benevolent Cemetery Board. It was discovered that to operate the cemetery as a non­profit association, by today's rules and regulations, it was necessary to give the land to the City of Milton. However, the Board operates under its own Bylaws and the sale of the lots still goes to maintain the grounds, along with help from many volunteers and other organizations.

The cemetery now occupies what is considered to be the center of town.It sits next to the major north-south artery, Stewart Street. Berryhill still remains a major east-west road, highly utilized despite its strictly residential zoning. However it is merely two blocks north of Highway 90, which has superseded it in importance. Next to the cemetery are the Chamber of Commerce; Sun Bank, the firehouse and two former gas stations, one re known restaurant and the other, an insurance agent's office.

The Milton Benevolent Cemetery Board recently received a donation of approximately two adjoining acres that will allow for future expansion, as it is nearly full after almost 190 years of use. It had been predicted by our forefathers that the timber that fueled the development of the town would last for 400 years. It lasted 100 years. They could have never predicted that the cemetery would outlast the trees by one hundred years.