The City of Milton Fire Department is the primary emergency response agency for the City of Milton. Our full-time, all-career department consists of 15 certified firefighting personnel divided into three 24-hour shifts of five members each, and the Fire Chief. Members of the department have over 195 years of combined career firefighting experience. The department deploys 3 Triple-combination pumpers (Fire Engines), a Midi-Pumper Rescue, and a 17-foot Rescue Boat, all housed in the Fire Station at 5321 Stewart Street. This state of the art facility provides living quarters for the on-duty shift, classroom and training facilities for the department, administrative offices of the Fire Chief, and storage for the fire apparatus, supplies, and all fire department equipment.

The City of Milton Fire Department’s response times are consistently maintained within 6 minutes, meeting nationally recognized response standards for both fire and emergency medical responses. (The December 2006 consultant report assessing the Emergency Medical System response in Santa Rosa County, conducted by Fitch & Associates, recognized the City of Milton Fire Department as the only department in Santa Rosa County to do so.)

Within the City of Milton, the first unit to respond is either a Rescue or an Engine, with a full crew (two personnel for a medical emergency or vehicle accident, four personnel for a structure fire), ready to immediately begin rescue or fire suppression operations. As brain death begins after only six minutes without oxygen, this rapid response time is crucial in any cardiac or respiratory emergency. Fire development is also directly related to response time, as the fire grows rapidly in the first few minutes, to quickly exceed the capabilities of the first-due crews. It is often crucial that first arriving fire department units get water on the fire within the first eight minutes of a fire to increase the chances of occupant survival and reduce property damage. Our department’s aggressive "fast attack" capability keeps fire losses consistently low. The department maintains a very favorable ISO Community Fire Protection Rating of 4, helping to keep property insurance rates as low as possible. 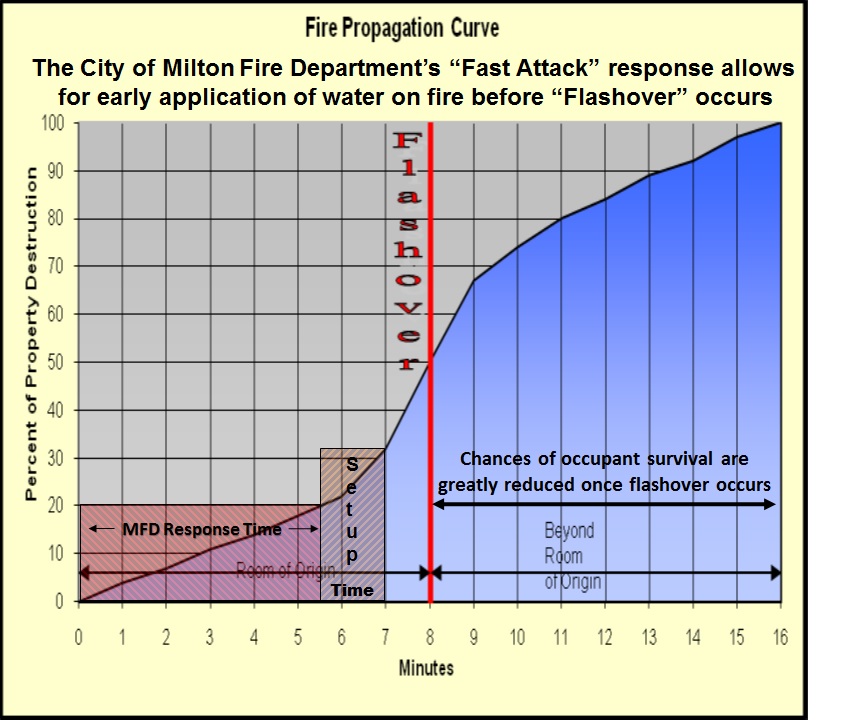 The ability of fire suppression forces to greatly influence the outcome of a structural fire is undeniable and predictable. Data from the National Fire Protection Association proves that rapid and aggressive interior fire attack can substantially reduce the human and property losses associated with residential structure fires. 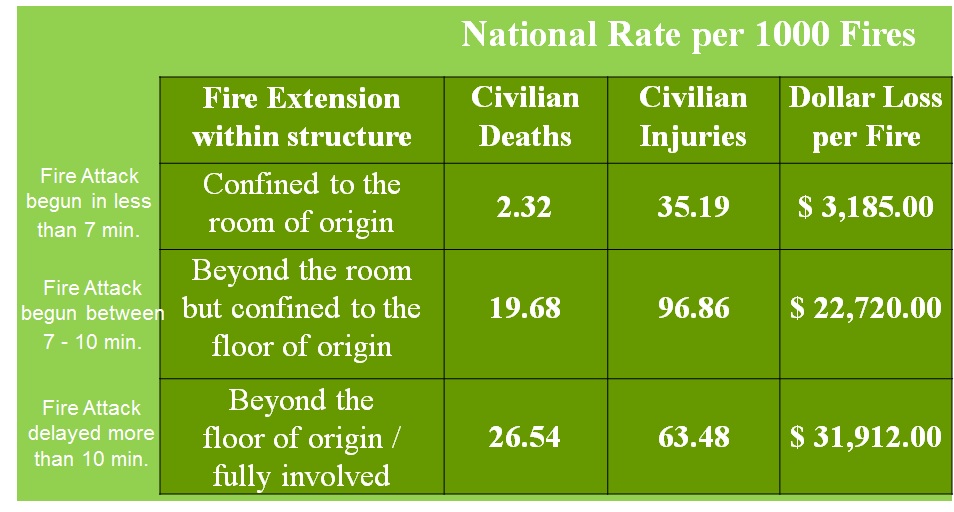